‘Igniting the Inner Fire’ is an inspiring weekend using meditation and yoga practices to increase vital energy and balance the digestive fire. You will also learn the power of the Manipura chakra, your navel energy centre, and how to balance it to enhance health and vitality.

In ancient times, fire was worshipped universally through ritualistic practices for its life-giving qualities and to avoid its destructive powers. Even today in India and elsewhere, fire is still worshipped. There are special fire rituals to end drought, enhance fertility, and for various illnesses. The combination of fire and mantras purifies the environment, and those who perform the ritual, with subtle shifts in the surrounding molecules.

In earlier times the sun was also worshipped daily when it arose. A common yoga practice today called Surya Namaskara (Salute to the Sun), is a remnant of sun worship. It is a vital technique within the yogic repertoire – its versatility and application making it one of the most useful methods to induce a healthy, vigorous and active life. It also helps to prepare for spiritual awakening and the resultant expansion of awareness. 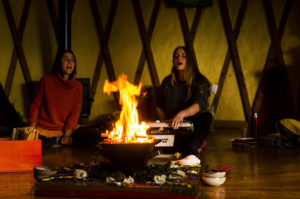 Surya Namaskara is composed of the three elements of form, energy and rhythm. The postures of Surya Namaskara generate prana, which activates the psychic body. When performed as a regular sadhana, it regulates pingala nadi (the active physical energy) and vitalises the system as a whole. This leads to a balanced mental and physical energy system.

In the human body, or the micro-cosmos, the element fire is represented within Manipura chakra or the energy centre at the solar plexus. The name solar plexus itself reflects the fact that the internal sun lives here. The Sanskrit word Mani means ‘jewel’ and puri ‘city’ thus, manipura is described as the city of jewels, shining bright and luminous, full of wealth and power. Fire is a heating force that alters all in its path, thus the balance of the internal fire and how it manifests is highly important.

In the Manipura chakra, prana or life force energy can express as overactive or underactivate. At the rajasic (over-activated) level, a person will have too much drive in an imbalanced way. They may be forceful or take actions to create situations to their advantage. However, this behaviour and use of power is ego-oriented. This can be seen in our modern and corporate lives, where there is often stress,  thirst for success and power, all without consideration for others or for the environment. The fire energy is often spent in an unaware way and it gets depleted quickly, so that exhaustion or illness arises from the over-utilization of energy.

The tamasic (under-activated state) of manipura is one of powerlessness. One feels they have no control over the events of their life, and they have no power to change. As Manipura chakra is the store-house of prana or fuel, if the store-house gets depleted as often does in our modern approach to life through stress, activity without awareness, bad eating habits etc, then the health becomes poor, depression, and lack of will or zest for life manifest. Also there may be a manifestation of sluggish digestion and excess mucus in the body, resulting in illness.

When the fire centre is in balance, the person will have a strong digestion, energy to accomplish anything (in a balanced way), and they will feel healthy. A person with a balanced fire chakra, will usually do actions that benefit humanity and for higher spiritual purposes. When the consciousness evolves to manipura, the practitioner acquires a spiritual perspective. 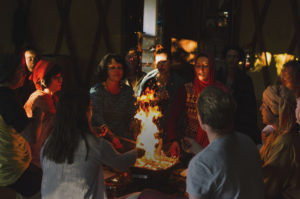 In the Satyananda Yoga tradition there are a series of yoga postures that are called the digestive series. They act directly on strengthening and balancing the internal fire by strengthening and activating the abdominal muscles and organs. As mentioned, the yoga practice of Surya Namaskara is another powerful practice to awaken the internal sun energy. And if it is done in the proper way, with a subtle awareness, the effects are far greater. Breathing practices are also used to strengthen the internal fire.

There are rare opportunities to attend a fire ceremony. At Anahata Yoga Retreat, fire ceremony (havan) is performed three times a week, invoking this energy of transformation. The fire ceremony purifies the air and makes it sacred through the chanting of mantras and oblations offered. The mantras generate an anti-polluting effect through the appropriate sound waves and the oblations are consumed by the fire to produce their essence. The fire then spreads the essence in all directions through the air. The area positively affected by one fire ceremony can extend up to 20 sq.km, and the energy that is released replenishes the oxygen content of the atmosphere and purifies it.

Regardless of who we are and what we do, we can begin to affect our daily life in a positive way by using the simple practice of honouring the gifts that the manifest fire gives to us. Take a moment to be thankful to the sun for its life-giving qualities. With the conscious use of the element fire in the micro and macro cosmos, we can transform our life to create greater health, life energy, and a drive towards positive action to help others and ourselves. Ultimately, inner transformation leads to outer changes allowing the fire of life to burn in a balanced way.

We are not currently running this retreat. To see our other exciting upcoming events, click here.