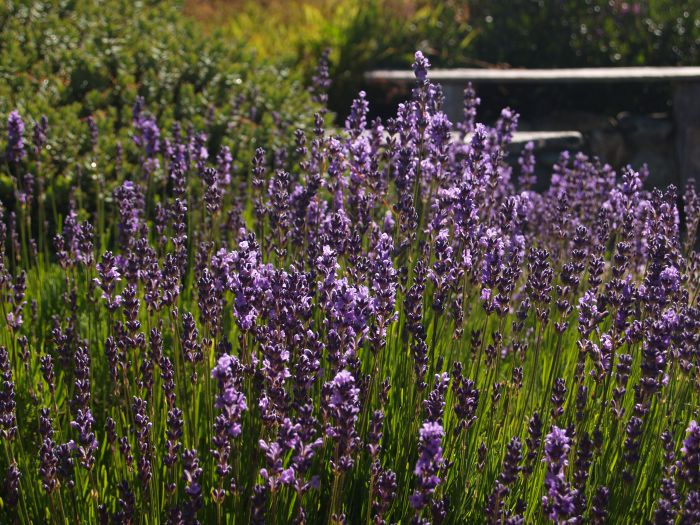 Few essential oils are as versatile as lavender, or as easy to use. It is the standard oil for many aromatherapy uses from headaches to scented candles to insect repellent. It is sweet in perfume, soap, potpourri, scented linen and air fresheners, and attracts the bees for pollinating spring blossoms. It’s a key plant in our permaculture gardens here at Anahata.

Lavender is a versatile plant. Equally at home in the herb garden, the cottage garden, the veggie garden, wild spaces or as a feature all of its own. It can be grown as a bush, a standard plant, a trailing plant, in a pot or as a hedge. It can be shaped and pruned or left to grow, picked and dried, pressed or used fresh.

For many people lavender is a wonderful herb which has been used for centuries as a disinfectant, an anti-inflammatory, and as a treatment for varied conditions like depression, insomnia, burns and skin conditions. It is also effective in shampoos, soaps and cleaning mixtures and is used dried to scent towels, linen and clothing. It’s an effective insect repellent and companion plant and will deter codling moth from apple trees. Hang handfuls of it above the fireplace to encourage its scent around the room.

But its beginnings were much simpler.

The Greeks and Romans loved lavender. It has been mentioned in literature written over 2000 years ago, like the classic Materia Medica, the first medical herbalist book. Used mainly for medical purposes in those early times, lavender became widely used for beauty and cosmetic preparations around the 6th century and over the following ten centuries its uses became more varied and specialised as technology slowly advanced.

By the 12th century lavender gardens were being designed with some thought, as the great era in European gardening began. With ideas borrowed from highly detailed palace and monastery gardens, lavender evolved from a useful herb into a highly desired ornamental plant. With its introduction into England around the 1500s its growth was spread widely across southern and central Europe, northern Africa and across the Middle East and drier Asia, and also into the colder northern regions where frosts weren’t too severe.

By this time several distinct groups of lavender plants had been isolated. The stoechas group are easily recognised by the ‘rabbits ears’ perched on top of each flower spike. Commonly referred to as French or Italian lavender, it prefers a warmer sunny climate, is quite frost tender and has a less sweet smell than other groups. Well known varieties of this group include Marshwood and Pippa, both varieties having been bred in New Zealand for local conditions, along with a host of more traditional varieties grown in the northern hemisphere.

The second group are the spica or English lavenders (although they never originated there). These include favourites like the Old English cottage lavenders, the augustifolia varieties such as the white Alba and pink Rosea and the intensely coloured Hidcote cultivars. These lavender types are more adapted to the New Zealand climate, being more tolerant of lower temperatures and more rain. They are often considered to be the true lavenders, with both the foliage and the flowers having the more accepted sweet lavender smell.

There are as many varieties of lavender as there are uses for them. Add in their growth habits, their companion plants and colours, their intended uses and a few personal choices and the dilemma as to what to plant has only just begun.